COPENHAGEN, DENMARK, MAY 10, 2018 – As the designer of the most sophisticated RF solutions for broadcast, film and live production, Wisycom comes to the aid of Victor Lang, a wireless audio system engineer for European Tour Production (ETP), in order to achieve full RF zone coverage and impeccable sound while filming the Danish charity television show Break Cancer (Knæk Cancer).

ETP, a rental and production company that produces and distributes audio, video and sound for a variety of concerts, television programs, live entertainment shows and festivals, has been involved in the wireless and RF aspects of the production since April of 2017, and has exclusively relied on Wisycom.

When Lang first started working on Break Cancer in 2015, he instantly knew Wisycom’s equipment would be a perfect fit due to the company’s long-term success in the European television broadcast market. “In Denmark, Wisycom is considered an industry standard for wireless sound with many of the TV stations and OB truck companies utilizing the company’s products as part of their production set ups.”

While on set, Lang depended on a variety of Wisycom’s RF products that include 20 channels of the MRK960 Modular Wireless Microphone Receiver System that fed into the MAT244 Programmable Matrix Combiner for full coverage in studio frequency zones while using the MTK952 Dual Wideband Transmitter paired along with the MPR50-IEM Wideband True Diversity IEM Receiver. 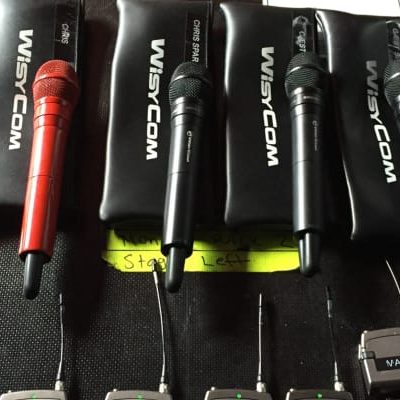 “The wideband capabilities of the Wisycom products helps me as a frequency coordinator, especially for projects like Break Cancer that have a high channel count,” says Lang. “The range on these products is incredible; I like that I’m not limited to small bandwidth, and the audio quality truly sounds amazing. I have to be able to trust the equipment will perform without any interference; knowing that I have reliable products from Wisycom makes me feel much more confident in executing my set up.”

Lang specializes in creating multiple zone RF distribution coverage for large scale events. The ultimate goal is to produce flawless coverage in and around the studio facility for all the wireless equipment in use, the show host, and all the musicians that are involved.

Lang plans to employ Wisycom’s wireless and RF distribution products for upcoming projects with ETP. He especially likes that Wisycom can be easily integrated and paired with multiple products and brands.

“On large scale projects, there is such a large scope of products being utilized that is essential that everything works together and not against one other,” concludes Lang. “With Wisycom, I can expect exceptional quality, the utmost efficiency and am able to create optimal coverage of the event. Wisycom’s products will always be an essential tool for me to have as a wireless integrator. It’s always a must-have.”