WASHINGTON, D.C., JULY 18, 2018 – Known in the industry for his work on high-profile TV documentaries and wildlife shows, Nicholas Donnelly’s experience as a cinematographer has also afforded him the ability to recognize the best audio products to suit the requirements of his shoots. The DP has long called on Wisycom, designer and builder of the most sophisticated RF solutions, for his ENG and production needs.

Included in Donnelly’s arsenal are the company’s MTP40S Bodypack Transmitters and MCR42S and MPR30-ENG Broadcast and Film Receivers, which he uses both on-location and on-set. “Last year, I had my Wisycom gear with me in five different continents; they were essentially all over the world,” he says. “The projects ranged from wildlife shoots to scripted documentaries to traditional programming and ran the gamut from studio work to extremely remote locations. I have had [the gear] to the North Pole, where it was -40 degrees Farenheit (-40 Celcius), and I have used it in the Sonoran Desert, which occasionally got as hot as 115 degrees Fahrenheit (46 Celcius) during the day, and it worked flawlessly through all of it.”

Donnelly typically works as a single-op in the field and incorporates Wisycom into his run-and-gun rigs in conjunction with the RED 8K HELIUM camera, which he says provides the most simplicity and ease-of-use. “The MPR receiver is light enough that I can use it on my gimbals without it affecting the balance,” he explains. “In the studio, I use the two-channel MCR, slotted directly onto my ARRI ALEXA camera, with just a single wire, which is nice.” 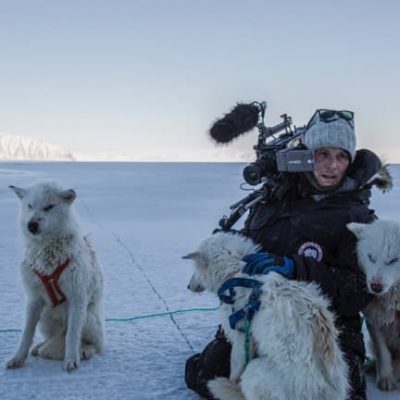 For projects where Donnelly works with a sound tech, his audio rig becomes considerably larger. “We have a variety of big mixer bags in which the Wisycom is integrated into the Sound Devices 664 mixer-recorder itself,” he adds. “Since there is no need for cables or individual power supplies, this setup is beautiful for us. The 664 has a ‘Super Slot,’ which our Wisycom receiver goes directly into, with all the connections and power integrated. It’s simple to carry around, or toss into the back of a Jeep, and go wherever you need to go.”

Donnelly credits the products’ wideband signal as his No.1 reason for switching to Wisycom roughly two years ago, but there were many other reasons as well. “I picked Wisycom for its wideband frequency, which I think was the first offering of its kind, and for its universal compatibility with other products,” he says. “Investing in architecture of this nature is tough for anyone – whether a freelancer or major network – so you want it to be as worthwhile as possible. With Wisycom, we are able to integrate it with our existing equipment, which enabled us to break out of the chains of the “block system” and from being locked to just one manufacturer.”

The DP has been building his arsenal of Wisycom equipment since 2016, having accumulated 60 transmitters and 50 receivers. “I can only think of about three incidents in which we had to have something repaired or serviced, and each one was due to the product being mishandled,” he concludes. “We never had a situation in which it failed on us.”

Donnelly’s skills in the field have taken him to some of the most challenging and remote shoots across the world. The award-winning cinematographer has worked on more than 30 National Geographic films in his role as cameraman, and he concurrently serves as equipment manager and technical consultant for all of the channel’s productions.